"If you show a gun in the first act it had better have been fired by the third act" - Alfred Hitchcock, presumably paraphrasing Anton Chekov.

The Host (not to be confused with The Host by Stephenie Meyer, reviewed here) is a Korean horror film and one of the greatest monster films ever: the story of one dysfunctional, bickering family's quest to rescue schoolgirl Hyun-Seo from a gigantic newt-like creature that has emerged from the polluted Han river. Where a Western film might separate two lovers, here we have a mobile-phone obsessed daughter, a loving but brain-damaged, childish and narcoleptic father, an uncle who is college-educated and unemployable, the wise but stubborn grandfather, and the aunt who is an international sportswoman.

It is here that the principle of Chekov's Gun applies: Nam-Joo (Doona Bae) appears on television in an early scene, juxtaposed with the scenes of monster rampage chaos outside the caravan. When she hesitates before firing her crossbow, earning a time penalty and losing out on the gold, you feel you know exactly how this film is going to end. Your prediction will be both right and wrong. Chekov's Gun is indeed fired; however the ending is neither a classic triumphant parade nor a classic horror-film twist in the tail - instead the film closes on an understated, melancholy note. 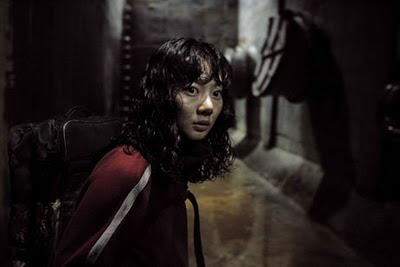 I thought the cinematography was stunning, from the stark laboratory-set opening introducing the theme of chemical pollution, to the claustrophobic action in the sewers, to the final confrontation and scenes of chemical warfare there are too many memorable shots to count. The film also succeeds in making you love the cast of grief-stricken and unlikely heroes who try, fail and try again.