Something different: my first Scratch-programmed game, inspired by what may be history's worst ever paperwork nightmare - that occasion when Queen Elizabeth I accidentally signed the death warrant for Mary Queen of Scots, as it was mixed up with all her other documents. I know, happens to me all the time. At least, that's her story - while it's frankly a rubbish excuse for an execution, it's a great excuse for a game...

As your ministers place their warrants before you, sign those deserving of death with your quill, - but beware! beheading the more popular celebrities of your reign will dent your popularity, so make sure you don't sign them, and some treacherous ministers might try to trick you into signing your own warrant.

Remember to dip your quill in the inkwell whenever it runs out.

Although Scratch is a fantastic BASIC-style programming system, for the moment it is Flash-based which means PC only. Apologies to Apple users - but hopefully there will be an HTML-5 version sometime.
Posted by Sci-Fi Gene at 00:41 2 comments:

"Amani, this is Liang. I've been exploring these Martian caverns for ten hours now and I'm reaching a conclusion about the nature of this game. The discovery of a smooth-walled vertical cavern running through many layers of the map confirms my hypothesis: this is not a naturally occurring structure but a tribute to the classic BBC Micro era game Exile."

Waking Mars is a game for mobiles, tablets etc. with impressive scope. As astronaut Liang, you explore a network of caves with your jetpack, searching for a missing robot and discovering an ancient ecosystem as you go. In order to progress, you'll need to understand the relationships between the different life forms (your computer assistant, ART, is keen to point out that they are not technically plants or animals), and use this knowledge to increase the biomass in each area.

The gameplay area is huge, and after you've taken the first few steps the game becomes non-linear, allowing open exploration and free travel between areas of the map you've visited. There's something new to discover in most zones, and plenty of memorable moments. The non linear play also means it's possible to "complete" the game, reaching one of the alternate endings, without making all the possible discoveries, and different players will have different experiences. That said, in about 15-20 hours of play I think I was able to explore the entire map and as far as I know I have found all the discoveries and possible endings.

Physically the game plays like Exile in terms of exploring a 2D cave system by jetpack, avoiding hazards such as molten lava, rockfalls and some of the more vicious plants. However the game mechanism of solving puzzles through planting seeds and managing ecosystems - third person gardener? grow-em-up? - is perhaps unique. I love the fact that while some puzzles are scripted or set up, some arise naturally from your own actions and mistakes. You can introduce a species of plant to an area that rapidly colonises and kills other species, and regaining control can be hard work.

There's some decent characterisation too. Liang, your character is cynical and prone to silence. He is assisted from base by Amani who is much more chatty and open minded, leading to some great Mulder-and-Scully banter. ART provides a comic element - he communicates through smiles (a little like GERTY) and suffers from a malfunctioning language module, as well as a habit of stating the obvious.

It's good to see that epic computer games are still being made, even if mobile gaming as a whole is skewed towards casual games. Yes, Crossy Road, I'm talking to you. There have been other exceptions - I previously reviewed the excellent Deep: Submarine Odyssey here - and of course there are newer gameplay styles such as Minecraft that reward longer play in different ways.
Posted by Sci-Fi Gene at 17:41 No comments:

The end is in sight for Humans - possibly in more ways than one, as the final episode approaches tonight. My thoughts: The quality of the drama in this series has been superb throughout - acting, script, characterisation - and I've really been drawn into the story. 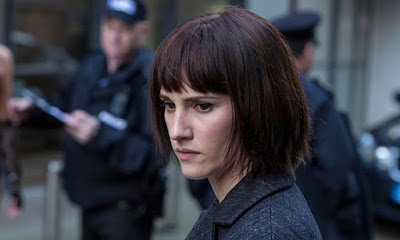 The focus has been on the human drama rather than the technology, and the themes of slavery and individuality have continued. I was worried at the beginning that Humans was just a mash-up of other android movies or TV series but this has just been the background allowing a particular story to be told.

There have been plenty of plot twists and revelations, some predictable but some unexpected. I look forward to the ending even though I suspect it will not be a happy one, and once it's over I will be looking for the original Swedish series Real Humans to compare while I wait for series 2.
Posted by Sci-Fi Gene at 17:30 2 comments: