The Only Whale Is Essex [Review: White Space]

Space... the final food frontier. These are the voyages of the starship Essex, it's continuing mission to explore strange new worlds, to seek out new life and new recipes, to boldly eat what no man has eaten before.

White Space, also released as Beyond White Space, is a 2018 sci-fi movie. It is the future, and mankind has taken up space fishing. Captain Richard Bentley (Holt McCallany) commands the starship Essex and its dysfunctional, squabbling and unfeasibly good-looking crew. Their mission: to catch space-crabs (these are giant, edible asteroid-dwelling creatures actually called Clickers, not some sort of space STD) under the watchful eye of inspector Navarro (Zulay Henao). However Bentley's father perished seeking Tien Lung, a legendary dragon-like space creature, and Bentley is obsessed with revenge. Yes, this is another sci-fi take on Moby Dick. And no, this is not going to end well. 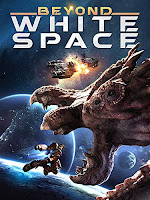 The best aspects of White Space are the ship and the crew. The Essex is well designed inside and out, it has character - part submarine, part trawler, it's dark and atmospheric, there's plenty of blue lighting which is important in sci-fi, and by the end of the film you can feel reasonably familiar with it. Is it named after my home county of Essex, England, famed for its orange lifeforms? Or for the various towns or counties also called Essex in the US? Perhaps it was named after David Essex, who finally receives the acclaim he so deserves for the song "A Winter's Tale" in the 22nd century. We will never know. The visual effects are great for the various spaceships, a little less great for the creatures.

I enjoyed getting to know the crew - interesting characters and interesting relationships, although Hawthorne (Mike Genovese), the marinated ancient mariner, is a bit of an annoying cliché. The cast are relative unknowns, at least to me. Perhaps I should get out more.

I actually think this film would have been better if it had just focussed on the captain and crew with their various obsessions, and let their tensions, arguments and misbehaviour go even further - but instead the writers throw in such highly original elements as Space Pirates (TM)! and a Parasitic Life Form (TM)! which add little and get in the way of the story.

White Space is a decent B-movie, and as Moby Dick sci-fi adaptations go I found it more enjoyable than 2010: Moby Dick. It gets enough right to be watchable despite its flaws, and manages to reel in a leviathan 3 stars out of 5.

Bird On The Wire [work in progress: Peahen] 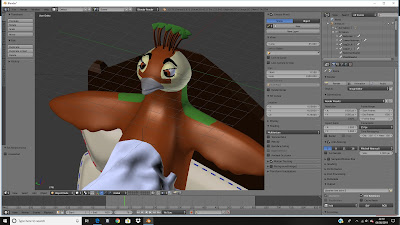 
This is a work in progress, there's a lot of work still needed on the jerky movements and some issues to straighten out (literally) with the blanket simulation. I started modelling this character in Blender for a project that has now changed direction. I may develop it further and use it in a different project in future.
Posted by Sci-Fi Gene at 22:21 No comments:

U Can't Touch This [Open Theremin]

In her book "Method for Theremin" Clara Rockmore, one of the greatest theremin players, defines a thereminist as one who approaches and welcomes it as yet another voice with which to interpret real music, not a magic toy for producing strange and eerie sounds. 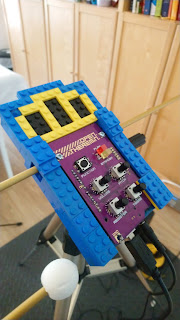 I have to be honest. When I built my Open Theremin my intentions were not entirely honourable. I intended to create a soundscape for an animation. I did have some ideas about musical elements but strange and eerie sounds were definitely a major part of the plan.

However my intentions have changed. The theremin is not an instrument you can just pick up and play, and it quickly became apparent that I'd have to learn the basics to control it. I've been working through books by Clara Rockmore and Carolina Eyck, and the more I've practiced, the more I've enjoyed trying to play music, even if it's not quite a virtuoso performance.

[Presented for your amusement...]

I still have plans for the animation, and a theremin-based musical score is still a possibility. Strange and eerie sounds are now on the back burner, and while I can't quite describe myself as a thereminist yet, I'm enjoying the challenge of becoming one.
Posted by Sci-Fi Gene at 22:05 No comments: