I've been on a literary medieval epic bender recently. At one point I even got some of the books confused but I think I've sorted it out now. 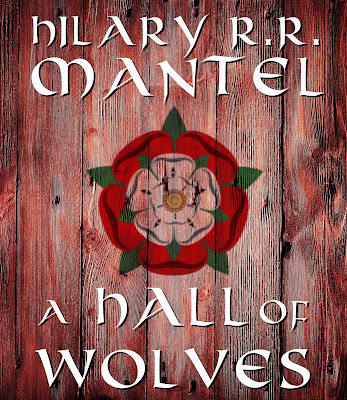 So to summarise: Thomas Starkwell is a young noble who rises to power through his allegiance to Archsepton Thomas Cranwell, eventually becoming the Hand of King Robert VIII, but must face up to his dangerous rival Queen Cersanne Boleynnister. Meanwhile across the seas, Janaeris Seyborn hatches her own plan to take the throne.

Hilary R.R. Mantel's fantasy world is vivid and complex, sometimes more convincing and sometimes less. I can vouch for the dragon biology which is pretty accurate, and of course the vicious winters that last for years or decades will be familiar to British peasants of any age. On the other hand Mantel seems a little too fond of graphic beheadings, and the idea of a King who would overturn a religion and risk triggering both civil and international wars just for a mistress who is playing hard to get seems a little far-fetched.
Posted by Sci-Fi Gene at 17:33 2 comments:

Message from Becki our bride-to-be [Reply To All]


A video message from Tracey Pickup, the actress who will be playing Becki, the lead role and only non-animated character in our short film "Reply To All." To find out more about Tracey, our film and the rewards you can get by backing us, come join us over at Kickstarter

and help us make this film awesome!
Posted by Sci-Fi Gene at 20:52 2 comments:

"Reply To All" Campaign Trailer


Crowd-funding campaign videos aren't supposed to be as funny as this! Watch our chucklesome 3 minute trailer for "Reply To All" and:

i) if we make you laugh once, maybe consider backing us

ii) if we make you laugh twice, give some serious thought to backing us

iii) if we make you laugh three times, reach down the back of the sofa and give us whatever you can spare After all, if we can be this funny in the campaign, just think how hilarious the actual film will be :-)

Disaster Movie Competition [Reply To All]

Ever had a REPLY TO ALL disaster?
Were you able to save the day?
Please share your story with us: info@caramie-productions.co.uk
Share the pain, spread the love.
We will select the 10 best stories, with the winners receiving an exclusive RTA-branded T-Shirt.
End of competition: 10th November 2013 at midnight (London, UK time)
The Reply To All Team x
Posted by Sci-Fi Gene at 08:40 2 comments:

Email ThisBlogThis!Share to TwitterShare to FacebookShare to Pinterest
Labels: competition, kickstarter, movie, reply to all, RTA

Coming Soon To Your Inbox [Reply To All]

Coming soon: "Reply To All" - a short comedy written by Nick Boocock and produced by Sophie Caramigeas / Caramie Productions. I will be directing, and working with artist Jeremy Hay to produce the animated sequences. There's a main shoot in January 2014 and the film should be complete March 2014. There's more info on the Caramie website here: no poster yet but watch this space.

There will be a Kickstarter campaign for this film. I directed a campaign video a couple of weeks ago with the production team and it's with the editor now for some final touches - we're planning to go live in the next couple of weeks. So you'll be spoiled for choice - you can follow progress on this film here at the Sci-Fi Gene, on the Caramie website, on Twitter and on Kickstarter.

We've been auditioning for the main part as well - somehow we managed to get the original 450+ applications down to just the 6 we met with yesterday. I'm impressed by all of our final 6, it will be difficult to choose. Meanwhile I'm also working with our artist to develop the animated supporting cast.

More updates on this project soon.
Posted by Sci-Fi Gene at 08:39 4 comments: