A Cat In St Albans

Film festivals are not the same - each has its own character. St. Albans Film Festival is a new event on the film calendar and it will be interesting seeing what makes it stand out. My short film (trailer here) will be playing in the category for over 18s, however it is clear from the programme that St. Albans will be an especially child-friendly festival. 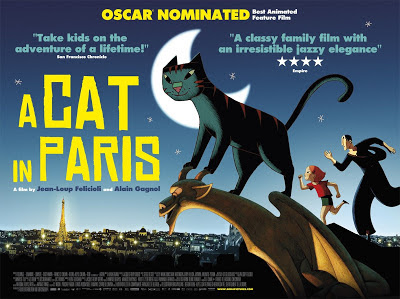 Events on the programme include childrens’ stop-motion and live filmmaking workshops, feature screenings of A Cat In Paris and The Prince’s Quest, a short family film category, a talk by Barry Purves on the use of puppets in cinema, and the Mini Student Film Award for the best film made by a 5-15 year old.

It’s good to see a programme reflecting the fact that some of the greatest films of modern times are children’s films, and, hopefully, one that will inspire some future talented filmmakers. The full programme is on the festival website here.﻿
Posted by Sci-Fi Gene at 00:29 3 comments:

Why Black Mirror Is Awesome And Will Fail [Reviews: Be Right Back and White Bear]

A grieving widow subscribes to a website that promises to re-animate her dead husband's personality by analysing his tweets. Another woman wakes up with no memory, to find she is on the run from sadistic masked killers, while the rest of the world looks on in silence and films her on their mobile phones. Black Mirror is back and it's just as twisted as before.

These Twilight Zone-like stand alone stories work for several reasons. They have a clear focus - creator Charlie Brooker is at heart a TV critic and each story extrapolates from existing websites and technology trends, even if they occasionally stray into fridge-nuking territory. The cast are particularly strong - this is important as it's the Job-like suffering of the main characters that forces us viewers to take sides in the scenario, before a reveal or plot twist brings us face to face with the consequences of that choice. There's incredible attention to background detail, particularly the hardware and software McGuffins that drive each story, and a willingness to face unpleasant questions and go beyond the bounds of taste in answering them. And while some plot strands are similar to other sci-fi scenarios there's often an intelligent alteration. For example, Stephen King's novel Cell and the White Bear episode both feature a rogue, mind-altering mobile phone signal, the White Bear doesn't turn us into zombie killers but zombie onlookers, leaving the very human killers free to do their work. 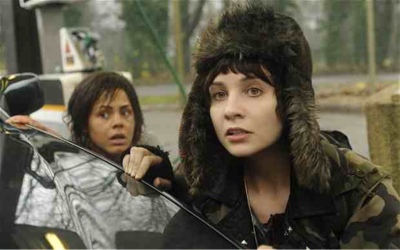 So will this novel awaken the consciences of the many, and make us more thoughtful about where our technology is taking us? Not a chance. Charlie Brooker should know that satire doesn't work - this was addressed in the last series episode Fifteen Million Merits, where a character staging a protest against the dystopia game show scenario is simply given his own TV channel as the moguls know he will be popular but won't actually change anything. Based on Twitter trends during the first two episodes, clearly people would welcome the personality substitutes of Be Right Back and the Justice Parks of White Bear. Memetics predicts that ideas will spread by any means, and the sheer quality of these TV dramas means these ideas will spread like wildfire until their time really comes.
Posted by Sci-Fi Gene at 08:45 No comments: 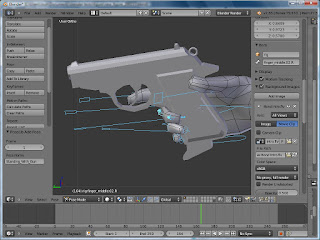 Project: animate a human figure using the Rigify add-on for Blender. The base mesh is Low Poly Male. 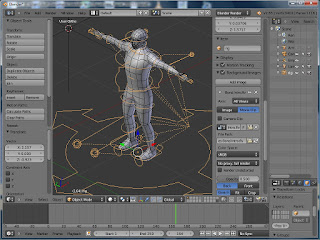 Add a meta-rig armature, adjust the bones until they all match the position of the body then hit Generate to build the Rigify rig complete with cool-looking control bones. 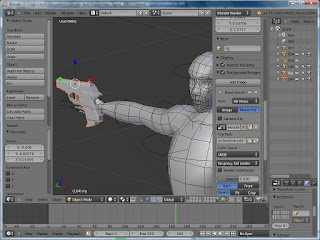 ﻿
A larger-than-life Walther PPK I happen to have modelled earlier.

The House That Joss Built [Review: The Cabin In The Woods]

Joss Whedon's film features a number of plot twists and misdirections, so it's more important than ever that I don't accidentally give away any spoilers.

So, this is a film about a group of teenagers who... but then there are these... and they can... so the teenagers...

This is really hard! I think I can reasonably state that The Cabin In The Woods is a movie, and the plot does involve some kind of log-based accommodation structure, which is indeed located in a forested area. But even that is only partly... and then it turns out that all along...

I give up. I enjoyed this film, but if I tell you almost any of the reasons why, then that would detract from your enjoyment of it. It's clever, although not necessarily Joss Whedon's best work, and there's a curious mixture of satire and nostalgia. You can read a genuine spoiler-free review on the Tired Of Previews blog here, or alternatively if you prefer the more spoilery type of review then you can go to Jigsaw's Lair for this detailed synopsis.
Posted by Sci-Fi Gene at 01:00 2 comments:

"We Can Get You Some Really Cheap Gear" Screening: St. Albans Film Festival

Exciting festival news: "We Can Get You Some Really Cheap Gear" is on the Official Selection for the first ever St. Albans Film Festival and will be screened on Saturday 9th March as part of the Over 18s short film night. See the full programme and find out more about this ambitious new film festival here.
Posted by Sci-Fi Gene at 01:00 No comments: