Voyage At An End 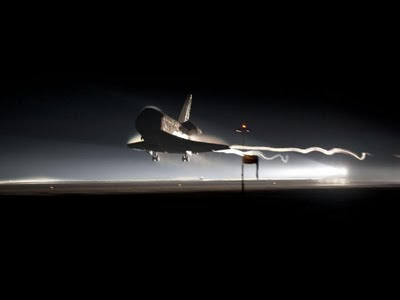 The Space Shuttle Atlantis landed safely, ending 30 years of the Space Transportation System. In addition to the research and engineering achievements the programme has opened up international collaboration in space. 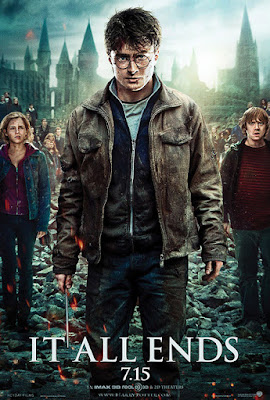 With seven novels, eight films and rather a lot of Lego tie-ins the Harry Potter saga draws to a close. Thanks to Harry, Luna, Dobby and Neville reading is officially cool once again. 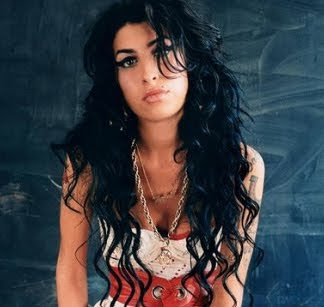 Amy Winehouse passed away at the age of 27. It's no exaggeration to say she had an extraordinary talent as a singer, a unique voice in British music.

Endings have been on my mind this week. There's no direct connection between these three stories and I don't want to make this too contrived - it's just that while each of these endings is sad in a different way, there are also aspirations for the future and real achievements to remember and celebrate.
Posted by Sci-Fi Gene at 01:10 2 comments:

Hunter Prey opens to a scenario not unlike Pitch Black: a spaceship crashes on an inhospitable world, the survivors include a prisoner, the last of its kind, captured by the army who destroyed its homeworld. The guards quickly realise that the prisoner has escaped and must recapture it.

Comparison with Gareth Edwards' Monsters is also appropriate: this is another indie sci-fi movie with a small cast and crew and ultra-low budget, powered by enthusiasm and goodwill, and shot on location in Mexico. Before making Monsters, Edwards directed a winning Sci-Fi London short; Hunter Prey director Sandy Collora gained a following from an impressive Batman fanfilm. Whereas Monsters relies heavily on subtle CGI, Hunter Prey is more traditional with much more use of costumes, prosthetics, make-up, props and models. Almost everything is on camera.

Hunter Prey takes a scenario that is superficially very simple, and develops it into a more complex plot: there are twists and surprises, a fascinating Sleuth-style cat-and-mouse dynamic between the runaway and his main pursuer, and another interesting relationship between the pursuer and his portable computer. While each alien is almost incomprehensible to the other, there are enough similarities that they are able to goad, challenge and learn from each other, in doing so gradually revealing the galactic events that have brought them together.

There are one or two missteps including a directorial cameo which is undeniably cool but lacks the gravity of the rest of the film, but on the whole this movie is excellent. It's more than just watchable, with characters and conflicts that draw you in. Everything comes together in this film thanks to excellent pre-production. It's not only the script and backstory which are very well thought out, but also the costumes and creatures and the choice of location. Shot on a Red camera against the yellow dunes and deserts of Baja, there's not a single scene in this movie that isn't just beautiful.
Posted by Sci-Fi Gene at 01:00 2 comments:

A re-shoot took place for the "2007" performance roll a week or two ago and I've started post-production. There are several artistic and technical changes, including upgrading the project to HD, with live footage taken on an HD-DSLR. Here's the shot I'm working on at the moment, with a frame from the earlier version for comparison. 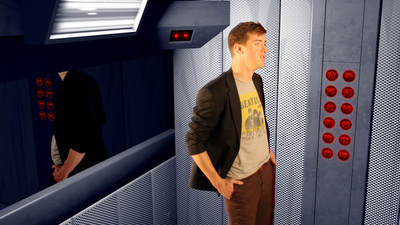 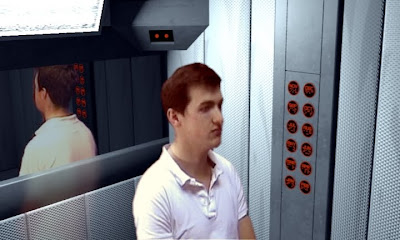 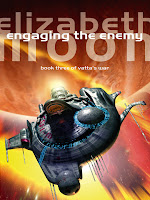 The third Vatta's War novel finds Kylara Vatta travelling to a series of amusingly provincial worlds as she seeks to put together a privateer force to strike back at the pirates. Each planet has its own eccentricities such as Moscoe, where there are millions of by-laws and regulations to enforce basic politeness standards, and crimes are tried in front of the Tree Lord in a mock forest court. Anyone appearing in this court must be dressed appropriately or face the penalties - "it is extremely rude to appear with an uncentered stripe."

This is the least action-heavy of the novels so far, although the plotting and scheming is more devious than ever and the plot does build to a climactic and inevitable space battle. Also, for all the light-heartedness, there are some deeper themes being developed. It's not enough to make Ky always the underdog, she is also allowed by the author to make some seriously bad judgement calls, alienating would-be allies and not necessarily winning all her battles. Stella Vatta is developed as a major character and the rivalry and personality clashes between Ky and Stella are deep and bitter even though they must trust and rely on each other.

Elizabeth Moon seems to be developing some ideas about capacity for violence through the books: Kylara has a genetic predisposition to enjoy killing, but this is separate from morality. Ky remains a very moral and caring character if somewhat on her own terms. It turns out certain other Vattas have also had this secret tendency, turning some into effective secret agents and others into psychopaths.

When the space combat scenes unfold they are good, although lacking the sense of large-scale tactical reality found in David Weber's Honor Harrington series - the appeal here is again Kylara's scheming that snatches victory (of a sort) from the jaws of defeat.
Posted by Sci-Fi Gene at 01:00 No comments:

Me Cheeta is the autobiography of chimpanzee Cheeta, presented here as the co-star of the original Tarzan films alongside lifeguard-turned-actor Jonny Weismuller. It's ghost-written by James Lever, making it precisely as authentic as 90% of other Hollywood autobiographies and arguably better researched, although there is a tendency to downplay the fact that in real life Cheeta was played by a series of chimps.

I don't usually read autobiographies of any sort - if I did I'd have probably enjoyed this spoof even more, but it's a strong comic novel in it's own right.
This is a one-joke novel, but the joke itself has enough complexity to sustain the plot - Cheeta at the end of his career is looking back knowingly on his innocent beginnings, always enthralled by humanity, and the more he is exploited, the more he loves us. It's the perfect frame for a series of stories about Weismuller, David Niven, Maureen O'Sullivan and the rest of the set. The No Reel Apes campaign to end use of live apes in cinema is name-dropped from time to time although Cheeta himself is scathing. "That's what CGI is, Don, just men in suits."
Posted by Sci-Fi Gene at 09:03 2 comments: