Update 20.10.2015 - this is the beta version. I've since returned to this game and made some changes to gameplay, taking into account comments by beta-testers. I've re-written the instructions, added a better menu system, a soundtrack and there are now six alternate endings. You can play the final version here.
Posted by Sci-Fi Gene at 21:17 2 comments:

Far Out Man [Review: Out There]

Those human pilots! If they're so keen to make their way back to Earth, why do they keep getting themselves warped away from it?

Out There is a neat little space opera for Android and iPhone. You wake from cryosleep to discover your spaceship has been 2001'd into an unfamiliar galaxy. Hundreds of star systems away, you are aware of a particular star that may be important, but your first task is not to die.

The game is turn-based and there's no combat. Well, that's not quite true. There is an enemy to discover and there is in fact a way to attack enemy fleets. But mostly, you choose the next planet or star, decide whether to land, whether to drill for resources, whether to meet the local species, whether to take over the abandoned spaceship etc. It plays a lot like a Fighting Fantasy gamebook - I have fond memories of Starship Traveller. It's also really, really hard. This is a survival-themed game - meaning you will die a lot. You can die by running out of hydrogen fuel, oxygen, or iron to patch up your hull, any of which is easy to do.

You stay alive by mining or scooping fuel, oxygen or iron from various worlds - along the way encountering aliens, discovering plans for technology to mod your ship, and experiencing random hazards and events. But as your ship only has limited storage space, and planets only yield a small amount of elements, it's hard to keep up stocks. If you've discovered a mod, you still need to mine the right elements to build it, and then it takes up even more of your hull space.

The map is random, as are many other game features, and when you die it's back to the start with a new map. However, if you're careful you can learn more about the game each time you die, and try out different strategies to survive for longer. As the game progresses, more "important" stars appear on the map, but so far I've only ever made it to one of them without dying. This is an extremely difficult game but one I've enjoyed exploring.

Another Day In Paradise [Work In Progress: Dystopia City]

The end is in sight: I've put together the main game cycle for Dystopia City, although I'm still doing some work on the various alternate endings plus the soundtrack. Beta very soon - promise.

Game produced in Scratch. Graphics hand-drawn in Paint, Paint.net or Scratch, with some backgrounds rendered in Blender.

A Lack Of The Clones [Work In Progress: Dystopia City]

Dystopia City is taking shape: I'll release a beta version soon. I had originally planned the game around the task of growing your population of cloned Citizens to 500 - but while playtesting, as I approached a population of 200 other parts of the game started to break down. As well as the Citizens themselves, who are clones in both the Scratch sense and the literal sense, I also use cloned sprites for my scrolling map, for fires and for some of the effects and menu options. A response from a helpful Scratcher on the forum confirmed my suspicion that the number of cloned sprites Scratch can handle is limited to 301. 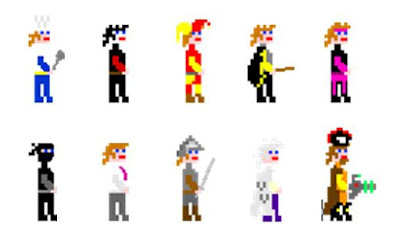 I've re-weighted the game based around a lower total population. Now working on the various possible endings, and thinking about sound effects and possibly music...
Posted by Sci-Fi Gene at 14:22 No comments:


Filmed on location in Somerset
The tower seen on the horizon is King Alfred's Tower, built in 1772
Special thanks to
Nicola and William Gething
Posted by Sci-Fi Gene at 16:46 No comments:

Ariel and I shot the visuals for this music video last year and I've been working on the animation and final edit  - the full version will be released very soon. To find out more about Ariel Undine or listen to more of her music go to her Facebook page here. You can also find my blog articles about the making of this video here: part 1 and part 2.
Posted by Sci-Fi Gene at 18:19 No comments:

Towards A Darker Tomorrow [Work In Progress: Dystopia City]

My next Scratch project is underway - a dystopia simulator inspired by EVERY YOUNG ADULT SCI-FI NOVEL EVER. 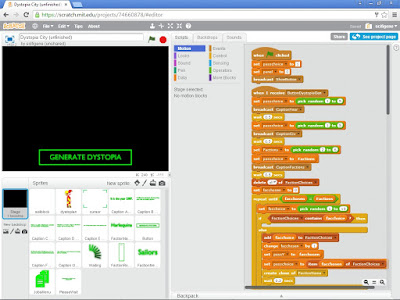 I don't want to reveal too much about the plot but I will say that if you are a fan of post-apocalyptic underground bunker-based cities, semi-fascist societies, factions, factions and factions then you may come to like this game.

But first I have to complete it. Programming challenges so far have included creating a scrolling map that can be changed as new tunnels are built, and having large numbers of dystopian citizens exploring it. One of the best features of Scratch is, it's surprisingly fast at parallel processing: so you can have large numbers of active sprites and still keep everything moving quickly, as long as each object has a fairly short routine. 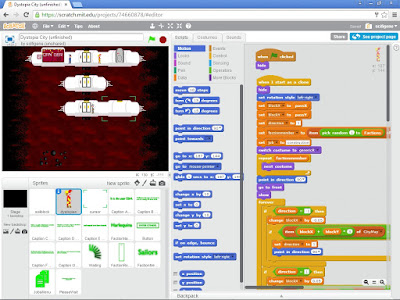 Scratch is a browser-based programming language a little like BASIC, but with an easy to learn object-orientated structure and commands that click together LEGO-style. It's provided free by MIT here in order to encourage the younglings to take up programming.

When I started programming as a child (I was raised in BASIC IV) I learned by experimentation and mistake-making. Over the years I've learned a little of other languages: 6502 Assembler, Basic V, C, Inform, DarkBASIC, COFFEE, HTML and Python. Scratch is the first language I've tried that brings back that feeling of experimentation.
Posted by Sci-Fi Gene at 00:43 No comments: