Flower Duet from the opera Lakme by Léo Delibes, played as a double recording on Open Theremin V4. I'm still getting used to the V4 - overall it's a lovely instrument to play but occasionally the pitch field can misbehave, whereas my V3 was always very stable and obedient. Adding a 3D-printed case seems to have helped.

Your theory is too hard to swallow

It seems clear to me

So why can't you see

The Earth can't be both flat and hollow!

The Moon's going to pay us a close call

But where will it land?

And where should we stand?

I'm steering clear of the White House, y'all.

Lots of rockets and heroes and creatures

What drives this mad artist?

In the depths of his heart is

A desire to annoy physics teachers.

Your Message Could Not Be Delivered [Review: You've Got Mail!]

I have always cited Nora Ephron's You've Got Mail! as being the worst film of all time. But everyone deserves a second chance. I gave it a second viewing to see if I had been too harsh. TLDR: I had not.

I should say that I am quite tolerant of bad films in general. I am a fan of The Asylum's brand of cheap and cheerful mockbusters, and I even sat through most of Shark Exorcist before giving up. My problem with Shark Exorcist was not the poor script, acting, CGI or editing, but the fact that this is a movie about a shark possessed by a demon (which incidentally makes no difference whatsoever to its predator behaviour) and disappointingly not about a shark who is also an exorcist.

Also, despite my love of sci-fi and fantasy I am not opposed to the romantic comedy genre in principle. Brief Encounter, Breakfast At Tiffany's, Four Weddings, Pretty Woman and When Harry Met Sally... are all great films.

So why does You've Got Mail! bring out the same reaction for me as others have described when watching The Human Centipede: First Sequence? Let's consider the evidence:

I challenged myself to find something positive to say about this terrible film. I found two things:

I cannot give this truly awful piece of cinematic history any more than a mediocre three stars out of five.

Score: Three stars out of five.

All movies reviewed on The Sci-Fi Gene blog are awarded three stars out of five. 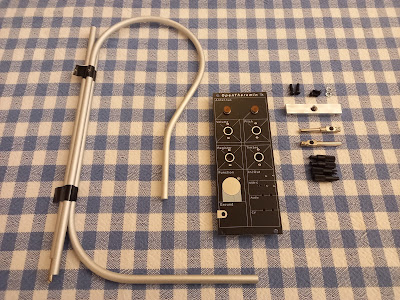 This is the kit. All the components of the V4 screw or click together so there's no need for dodgy soldering. 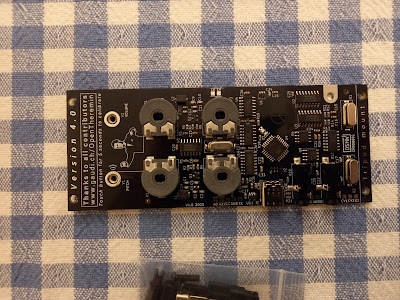 Like the V3, the V4 is a digital theremin based on an Arduino. Cleverly, as both Arduino and Open Theremin are open source design projects, the Arduino is included in the circuit for the V4, so there's no need to buy one separately. For more information or to buy a kit you can head to the project website here. 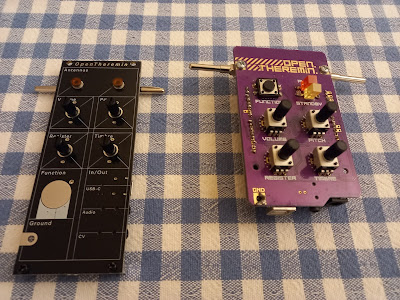 Side by side comparison: the V4 is taller, slimmer and lighter than the V3, and doesn't need to sit on a separate Arduino. Controls are basically the same but the play/standby control is a finger touchpad instead of a switch. Power is now USB-C, and there is now a CV line for synthesizer as well as the mini-jack audio. 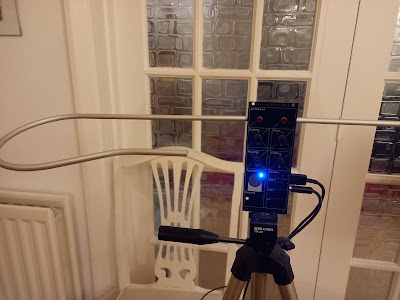 I am completely operational and all my circuits are functioning perfectly. Assembled, up and running after just a few minutes, and I've started playing. Feels and sounds very similar to the V3 so far. I will however need to order a longer USB-C cable. I might build a LEGO case later, but for the moment I'm enjoying the sleek, minimalist design too much. I shall record some videos and inflict some "music" on you soon. 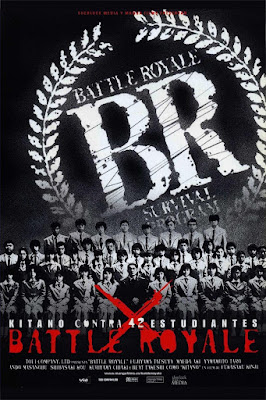 A Japanese high school class runs riot, with all sorts of behaviour in classroom and corridors, and pupils bullying and even stabbing their teacher. But this is all in a near-future Japan where, following an economic collapse attributed to a failure of discipline in schools, a law has been passed allowing classes of misbehaving pupils to be kidnapped, sent to an island, given a weapon (or in some cases a harmless item such as a shield or a torch) and some basic supplies, and left to fight to the death, with only the last child standing allowed to return home. And who should appear as the sadistic director of this particular Battle Royale but that same stabbed teacher, glorying in revenge on his former antagonists.

Battle Royale is a Japanese movie released in 2000, starring Tatsuya Fujiwara and Aki Maeda as students Shuya and Noriko, and Takeshi Kitano (the presenter of the original Takeshi's Castle) as teacher Kitano. It's a violent and darkly humorous horror movie, with frequent and graphic deaths. While it's clear that Shuya is the protagonist, most of the class are also given well-rounded characters and their alliances and duels are all played out, so the high number of characters can make the film a little hard to follow in places. Obviously this gets easier as the film progresses and more of the cast are eliminated.

Battle Royale isn't the only movie to portray gladiatorial games - of course Roman gladiators feature in Spartacus (1960) and Gladiator (also 2000), while Arena (1989) gives the concept a sci-fi twist. However there are a lot of similarities between Battle Royale and subsequent gladiatorial stories, particularly the Hunger Games books and films, and the recent Korean TV series Squid Game.

I enjoyed this movie although it does require a strong stomach and a pitch-black sense of humour. I would recommend it as an excellent revenge fantasy for any frustrated teacher. Three shuriken stars out of five.

Killing Me Softly [Reviews: The Love Witch and Season Of The Witch]

Witches are an endless source of fascination. Despite the attempts of Hans Christian Anderson, centuries of overzealous missionaries and Roald Dahl to paint them as agents of evil, our culture is full of more positive examples of witchcraft, whether in books, films, or in the real world with the modern day resurgence of Wicca. As a child I learned to read with Meg and Mog and later enjoyed reading about Mildred Hubble which should allow you to calculate my age. TV is full of portrayals of witches as powerful but sympathetic figures, such as Julia Wicker in The Magicians, or the magical cadets of Motherland: Fort Salem. Meanwhile there are plenty of films that use the concept of the witch in interesting ways - here are two recent examples I enjoyed. 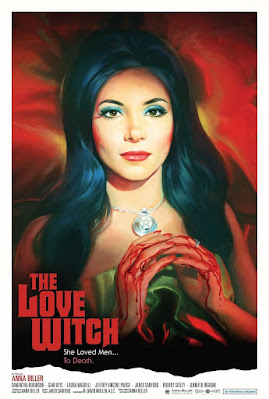 The Love Witch (2016) stars Samantha Robinson as modern-day witch Elaine Parks who sets out to start a new life and find love - with unfortunate, deadly consequences for her would-be lovers. It's filmed as a stylish tribute to 1960s Technicolor, with lavish settings and exaggerated colour schemes. Parks is literally a femme fatale but also a complex character, vulnerable, lonely and driven, and mesmerizing to watch. In some ways she reminded me of Alice Lowe's character Ruth from Prevenge, but Parks is not actually driven to kill (well, not often), it's just that her love is too intense for the men she charms.

The Love Witch also celebrates another form of witchcraft - that is, obsessive auteur-driven filmmaking. Anna Biller wrote, directed, scored, edited and produced the movie, spent several years finding, restoring or making the furniture for each scene, and made her own foray into witchcraft. The result is a unique and powerful vision combining feminine and feminist themes.

Season Of The Witch 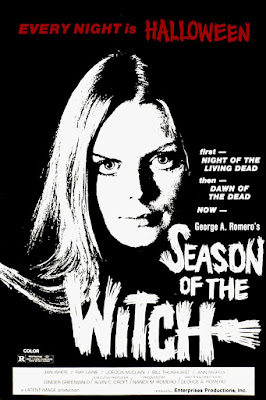 Season Of The Witch (1973) is an early George A. Romero film. It's curiously deficient in brain-eating swarms of zombies, instead the story revolves around dissatisfied and Wicca-curious housewife Joan (Jan White), her controlling husband, and her daughter who is having an affair with a teacher. Joan is introduced to Marion, a newcomer to the suburb who practises witchcraft, and gradually becomes drawn into witchcraft herself. This is more of a drama than a horror film, although there is threat and violence in places, and Joan experiences some creepy dream sequences in which she faces exaggerated or metaphoric versions of her everyday life.

Both films portray witches as powerful and unintentionally dangerous, while at the same time portraying witchcraft as a positive feminine role and as an alternative to patriarchy and convention. I awarded both films three pentagrams out of five.