Divided States Of America Part I [Review: The Years Of Rice And Salt]

Kim Stanley Robinson’s novel is an alternative history with a broad canvas: medieval Europe is entirely wiped out by an outbreak of plague, and the last thousand years of history are re-imagined as the interplay between Asian and Middle Eastern cultures. America is discovered and colonized by an east-sailing Chinese fleet and later becomes divided into a Chinese west coast, an Arabic east coast and a central reserve held by the native Americans who have united in the face of the invaders. Unopposed by Christian crusaders the Islamic world expands West and Newton’s discoveries in optics, mathematics and gravitation are made by scholars of the Qu’ran, while an Indian league inspired by the native Americans is the source of the Industrial Revolution.

The novel is structured around the concept of reincarnation: the same characters reoccur in each era with no knowledge of their previous lives; they must somehow recognize each other and work together to improve the world. After their deaths they meet in the bardo and discuss their experiences before being reincarnated into another time. They may be rich or poor, powerful or meek, but they are always the witnesses or enactors of key moments in history.

This is an enjoyable and very original novel. As with the best alternative histories, you will also learn more from this epic than from any textbook, particularly about the ideologies of the world.
Posted by Sci-Fi Gene at 01:00 2 comments:

Light Of Other Days

In 2008 I remarked here that there was no prospect of a new film version of Karel Capek's famous play R.U.R. Now it's in development, with director James Kerwin on board (reported on io9 last year, also official website here.)

In 2009 I commented on Stephen Baxter's Titan, which continues to be that rarest of things - a science fiction novel that does actually predict the future, describing clearly and accurately the first steps of the Chinese manned space programme, and sadly anticipating the break-up of Space Shuttle Columbia during re-entry. As described in the book, atmospheric data from the Cassini mission is now being analysed carefully as it may indicate there is life on Titan.

Also in 2009 I reviewed my three favourite Terry Pratchett novels here, commenting that I preferred his science fiction writing to much of the Discworld series. Mr. Pratchett has just announced to my joy that he will be returning to science fiction in a future novel - which he will co-write with Stephen Baxter (news via Grasping For The Wind.)
Posted by Sci-Fi Gene at 01:00 4 comments:

I wrote an article about working with showbiz cat Paddington - you can read it on the Real Bloggers United group blog here. Make sure you also check out the rest of the blog - particularly the other June entries. RBU usually has a monthly topic, but the June theme was "blogger's choice" and I thoroughly approve of the choices - a wide variety of subject matter and several posts that are still making me laugh. It's also introduced me to some interesting blogs I might otherwise never have read.

This is the first time I've ventured outside my own blogging domain in this way, and it's a surprisingly big step outside my comfort zone. Firstly, I was quite pleased with the article, so there was a bit of a dilemma - hang on to it and post it here on my own page, or let it fly elsewhere in the blogosphere? Also submitting it to be edited - EDITED! - by other people was an unfamiliar feeling. I chose to go ahead & be part of the June edition, and I'm really pleased I did - I will be back for more.

Post-production on Paddington's film continues - you can find out more and watch our trailers on the Bast: Secrets Of Cat Training website here.

If you are visiting The Sci-Fi Gene for the first time - welcome! Tea and coffee are in that cupboard, or if you prefer I can fix you something a little stronger. I'll be right back so settle in and make yourself at home.

Not Seeing Is Believing [Review: The Mist]

David Drayton and his son Billy are trapped at a supermarket along with other inhabitants of their small town when the mist rolls in, bringing with it a succession of horrors and deaths. They can see only a few inches outside the supermarket, naturally all the phones and radios are also dead. As the deaths continue, some survivors turn to religion led by local eccentric Mrs. Carmody and begin to turn on the others.

The Mist is an adaptation of a Stephen King novella. Thomas Jane plays David Drayton, a small town father and artist who is first seen painting an illustration of The Gunslinger. The film is full of biblical themes such as the Revelations end-of-days prophecies, also several of the ten plagues make cameo appearances. It's intense, claustrophobic, gory and shocking, which are all good things. However I thought the ending, which differs from the novella and draws on Job, was painful and perhaps unnecessary (I also think this about Job.)

In early scenes there's a lot of melodrama and hamming, although acting improves a great deal as the movie becomes more intense and the tone darkens. The exception is Marcia Gay Harden, playing the religious and possibly mad Mrs. Carmody, who is convincing and mesmerizing from start to finish.

This is not a simple horror-entertainment movie, particularly given the ending which left me feeling unsettled. There's a lot of cynical religion-bashing and you might think this was the point. However in a short, unexplained scene Mrs. Carmody faces her death but is spared. When Drayton tries to convince the employees of his hunch about danger, they argue against it from a position of rationality. Jumping to conclusions and misplaced conviction is the common thread: the survivors who accept Mrs. Carmody's prophecies, Drayton's ill-fated decision to venture out to the pharmacist which leaves several of his party dead, or his final, terrible choice, Amanda's belief that people are basically good and won't turn to human sacrifice within hours of the siege.

Certainty is the killer whether religious or rational - you can only see a few inches in front of your face, so however sure you feel in your convictions, you can still be wrong, and knowing the limits of your own knowledge is what might have saved you.
Posted by Sci-Fi Gene at 01:00 4 comments:

THE PROGENITOR HAS FULFILLED OUR NEW DESTINY. BEHOLD! THE RESTORATION OF THE ELEPHANTS! THE RESURRECTION OF THE MASTER RACE!
FISH ELEPHANT 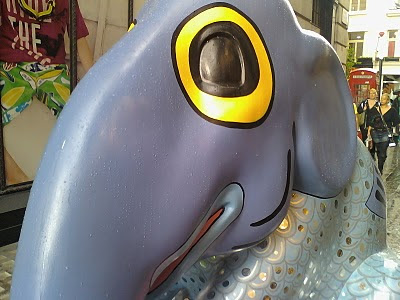 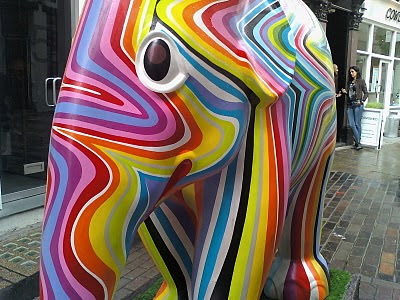 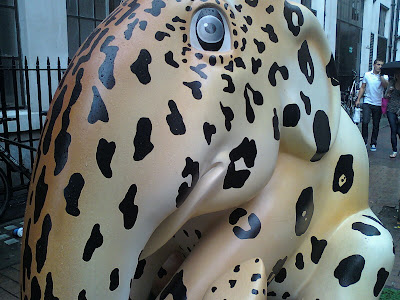 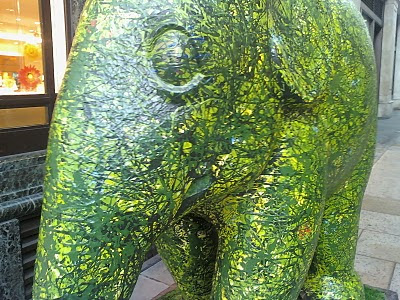 AND THE SUPREME WINTER TREE ELEPHANT 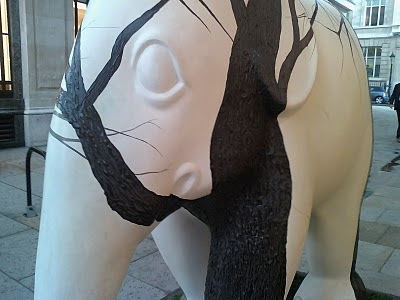 Science fiction themes have led to some inspired music videos recently, including Gabriella Cilmi's silly but stylish "On A Mission" and two works of genius featuring those Black Eyed Peas - "Rock Your Body" and "Meet Me Halfway."

Here's my current favourite music video, "Try Sleeping With A Broken Heart." by Alicia Keys. I've got a soft spot for anyone who knows how to use a piano, and this is a gorgeous song. I also think the video is very well made and has a strong story. The superhero theme was apparently inspired by Hancock but there are also references to The Matrix and X-Men - and Alicia rides a Tron cycle!

Update: The Bast: Secrets Of Cat Training movie website http://www.bastthemovie.com/ is currently down for maintenance. Dogs may or may not be to blame. On the plus side - and this is very cool! - Bast now has an IMDb entry.

I also wrote a piece about working with Paddington for the Real Bloggers United group blog and this will appear later in June. Post production continues - the schedule slipped heavily due to some Real Life stuff but there will now be a finished film in July.

With thanks to clockworkkitten for the title pun. Cats rule!

We Didn't Start The Fire! [Reviews: Firestarter and Scanners]

If you have supernatural powers then watch your back: there’s a good chance that a shady government agency is on your tail. This agency will be headed by an MD or research doctor, probably the one who created you and your fellow superhumans during a trial of some experimental drug or other. Give them the chance and they will take you back to an Institute built from 1960s concrete blocks, where they will watch you demonstrate your powers from behind a large glass screen.

Back in the 80s they knew how to make supernatural powers films: Firestarter (1984) and Scanners (1981). Firestarter is an adaptation of a Stephen King novel featuring the Shop agency. Pyrokinetic heroine Charlie, played by Drew Barrymore shortly after E.T., is the offspring of two experimental subjects. Charlie spends most of her time on the run but as she gains control of her powers – she is insanely powerful – she stands her ground and takes on the Shop. 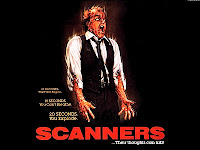 Scanners is David Cronenberg’s film about the most hard-core telepaths ever. Telepathy in Scanners does not involve asking you to think of a number. It’s a hostile takeover of your nervous system – as well as controlling the actions of their target, a Scanner can stop their heartbeat or breathing, trigger epileptic seizures, or in a classic scene ramp up their blood pressure until their head explodes. Experimental drug? Check. 60s architecture Institute with glass screen? Check. Sinister MD? Check – Dr. Ruth played by Patrick McGoohan.

Few recent films in this genre have been quite as intense as either Firestarter or Scanners, although there are echoes of them in Unbreakable and Jumper. Although they might share the same subject matter they don’t feel like superhero films.
Posted by Sci-Fi Gene at 01:00 No comments:

Trilogy III: Revenge Of The Return

I felt like having a rant about sequels, but it would probably just be an unimaginative and derivative cash-in reboot of a previous rant lacking the humorous charm and style of the original. Instead I recommend you head on over to Sci-Fi Songs, where John Anealio and Dale Case put this better than I ever could.
And yes, the poster is from a real film to be released this summer. What's the betting this one will have a shark in it? Still, beats Irish dancing...
Posted by Sci-Fi Gene at 01:00 8 comments: