We're Putting The Band Back Together [The X-Files]

I'd rather be liberated
I find myself captivated
[Catatonia, "Mulder and Scully"]

Watching the first episode on Channel 5 - impressively, in this day and age, this is not a reboot, a re-make, a re-imagining, a spin-off or a prequel. It's just a new series of The X-Files. Mulder and Scully have developed, as both characters carry the weight of their past experiences, but this is essentially the same recipe as ever - show something unbelievable, make it appear beyond doubt, then create doubt.

As this is a new series, and some of today's hybrid aliens may have been cloned too recently to have been exposed to the original, there is a need to introduce the characters and set out the stall. Thus Mulder spells out his own optimist-skeptic philosophy ("I want to believe" rather than "I believe") before being ignited by the latest conspiracy theory while Scully checks, double checks and triple checks her facts but is prepared to trust the results. The opening pitch for the new series, meanwhile, is the revelation that conspiracy theories are themselves part of a conspiracy to cover up an even greater conspiracy - or possibly they're not. Nice one. 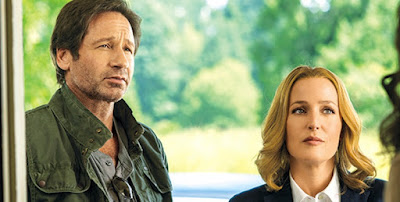 What really makes this show is the return of Anderson and Duchovny - both superb actors, easily good enough to take this show into orbit. The original series drew heavily on the electrifying chemistry between the two at every level, from the will-they-won't-they sexual tension to the sharp intellectual battles. Now, later in life, they've moved on from that relationship that was too intense to have lasted, but are still bound together - and it's still electrifying.

Can all this be maintained? The original series wrote the book on slow-burning story arcs. Let's give it some time.
Posted by Sci-Fi Gene at 22:41 3 comments: