Not such fungis after all [Reviews: Dark Entries, The Sheriff Of Yrnameer, Finch]

Dark Entries, Ian Rankin: Of all Ian Rankin's graphic novels that I've read, this is certainly one of the best.

The Sheriff of Yrnameer, Michael Rubens: Of all the space-operas that I've read where the plot revolves around a cargo of freeze-dried orphans, this is certainly one of the best.

Finch, Jeff Vandermeer: Of all the fantasy-noir detective novels set in a future where humanity is ruled by the MUSHROOMS this is certainly one of the best.
Posted by Sci-Fi Gene at 00:32 No comments:

Vatta Vatta Everywhere And All The Boards Did Shrink [Review: Command Decision] 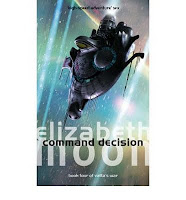 Kylara is now set on bringing together some kind of space force to combat the pirates. Cousin Stella continues to rebuild the Vatta trade empire from her new shop-front on Moscoe. Aunt Gracie, spymaster and fruitcakerer, takes on the planetary government that sold out Vatta to the pirates. In other news, Rafe Dunbarger, somewhere between Blackadder's friend Flash and Rimmer's alter-ego Ace, takes on the ISC conspiracy in the boardroom. So for the most part this reads less like a space opera and more like an episode of "The Apprentice."

I thought this novel was the weakest of the series so far - in particular, while the conspiracy plot moves forward there's very little character development and this is a shame. Ky's personal journey of discovery, as she comes to terms with the fact that she likes killing people, has been fascinating to follow through the earlier novels, and other, lesser characters have also developed in interesting ways. As I've pointed out before Elizabeth Moon isn't afraid to allow her heroes to learn by their mistakes.

Fans of ship to ship combat will be bored silly until the final third of the novel but will then thank their lucky stars they persevered: the plot builds towards a classic space battle between four fleets, once again Ky and her allies are outnumbered but the scale of the battle has increased by an order, and once again it all comes down to intelligence rather than brute force.
Posted by Sci-Fi Gene at 23:42 No comments:

Has the found footage genre had its day? Apollo 18 might be a good point to stand the genre down. True, at time of writing it has a meta-review score of 28% over at Rotten Tomatoes. True, it tells an unoriginal and highly predictable story within a lazy, generic Military-Government Conspiracy (TM) frame. True, it was launched at a press conference where dumb claims were made about the providence of the footage. Yawn.

In its favour, this is one of the few found footage films where the basic premise makes sense. Most FF films require the presence of an obsessive filmmaker or videographer: look, if some fifty-storey tentacled sea-beast and it's crab-like spawn are pursuing you through New York as the skyscrapers collapse around you, and you are actually sane, would you a) drop everything and run, or b) keep hold of fifty kilos of professional film equipment? What better way to show your girlfriend how much you love her than to stand there and video her while she is being attacked by demons?

It is logical that an Apollo moonship would carry lots of cameras, and that the astronauts would film everything. The film has purportedly been edited together from a collection of sources by a mysterious conspiracy website: so thankfully there's no attempt to tell the story in real time. Different film sources have different colours and looks, plus some are hand-held while others are fixed, remote controlled or motion-sensitive: so there's much more shot variety, and slightly less nausea-inducing shakycam (even so, you may still wish to take your preferred travel sickness pill before viewing.) It helps. Performances are good although not Oscar-worthy, sets and visuals are authentic. While Apollo 18 might not be the best advertisement for the future of the space programme (that would be Space Camp, obviously) the film really does bring back the magic and high drama of the Apollo missions: for me this was more of a draw than the horror element.

Directed by Timur Bekmambetov (Night Watch.) I enjoyed this film but I concede it could have been better.
Posted by Sci-Fi Gene at 22:40 2 comments:

Up late working in Blender on the 2007 video. The challenge is to stop the project getting unmanageably complex - as you can see from my current timeline I'm succeeding beautifully. 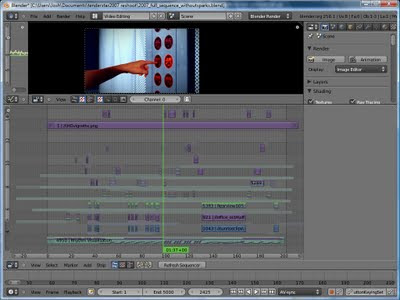 If caffeine was also a free, open-source download then the world would be perfect.
Posted by Sci-Fi Gene at 01:52 1 comment:

I started this animation in Cinema 4D back in 2009, and posted some work-in-progress stills here and here. At the time I was working on using complex textures, and also I was a long way from anything human - I still am! but wanted to do some soft-body animation. It's been left on the shelf for the last year or two as I've taken on other projects mostly in Blender.

I've returned to C4D recently to complete and render the last few shots, using Blender just for the final edit. There's not really a plot except in the sense that a football match or any other sporting event has a plot.

I'm reminded that, while it's not free (far from it!) even the ancient edition of C4D that I've been using has a really intuitive interface (the opposite of Blender although things are improving steadily) and some powerful features. I have one or two more unfinished C4D projects on my hard drive - it's tempting to return to them too when I get the chance.
Posted by Sci-Fi Gene at 14:12 9 comments:

White Collar Boy On The Run From The Law [Review: The Next Three Days]

"What kind of criminal drives a Prius?"
"A socially responsible one?"


The Next Three Days stars Russell Crowe and Elizabeth Banks. Lara is convicted of murdering her boss on what appears to be extremely strong evidence. John, her husband, is convinced of her innocence and as appeal after appeal fails he puts together a plan to spring her from jail. 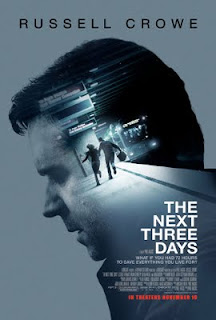 Crowe's character is attempting to escape his and Lara's fate, so The Next Three Days is science fiction. This is also a jailbreak movie but instead of hardened criminals or captured soldiers there's an ordinary man - an English Lit lecturer - trying to do something extraordinary for love.

In addition to Crowe and Banks who are excellent, Liam Neeson and Olivia Wilde have smaller but memorable roles. Meanwhile Crowe gets to make crazy diagrams on walls again, something I loved in A Beautiful Mind. See below for details of the other central cast member.

The film also provides a helpful tutorial on prison breaks including how to make a bump key, and how to force a car lock using a tennis ball. The plot relies on luck slightly too often but this is still an extremely enjoyable fantasy. The subtle influence of Don Quixote is a nice touch, as is the fact that one of the main characters is diabetic. However not everything is quite so subtle.

Did I mention the car? For two thirds of this movie Crowe is seen driving a black Toyota Prius in almost every shot. The car is as central to the plot as John himself, it gets shot at and damaged, and many of the Prius' most interesting features are showcased: for instance, in one scene it reverses into a short child. This is plausible given the poor rear visibility, but surely the child would have been visible on the rearview camera?

On second thoughts, I'm sure Russell Crowe can park without a parking autopilot so maybe he only has the T3 trim. The camera lingers lovingly over the Toyota logo, and in case you missed it all, there's the exchange above between two policemen puzzling over the Prius' presence at the scene of an attack. Product placement? I don't know what you're talking about.
Posted by Sci-Fi Gene at 23:14 2 comments: