Two short stories in Interzone #220 both look at the future of Web 2.0. and the 'net in general.

A lot of what happens on Web 2.0 can be described either as trying to get attention or trying to promote something. In "Monetized" by Jason Stoddard, these two processes are multiplied so that every interaction between two people is now an opportunity to promote something - everyone has an agenda, we're all scrambling after referral fees and there's no longer any such thing as innocent conversation - and this constant promotion is the basis of the new economy. Stoddard's novella is serious (although often humorous) and set in a well fleshed-out and very believable future. Meanwhile "Spy vs Spy" by Neal Williamson explores, albeit in a much lighter way, the more paranoid aspects of social networking - by laying out so much of your life in the open, you might be making enemies as well as friends, and of course the net makes it very easy to indulge in this kind of paranoia. In both stories, with the exception of Stoddard's hero, the majority of people seem to be buying into these trends rather than challenging them and I think this rings true - if so then far from empowering the user, Web 2.0 could be directing his or her movements. 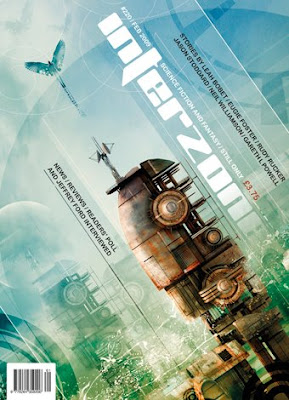 Interzone 220 opens with two very strong and very different stories - the Jason Stoddard, and (deep breath) "Sinner, Baker, Fabulist, Priest: Red Mask, Black Mask, Gentleman, Beast" by Eugie Foster. This surreal story of people living in a beehive society and changing their identity and personality each day with the masks they wear, contrasts with the cynical realism of Monetized completely, and while it starts like an adult, medieval re-imagining of Mr. Benn, it opens out into something dark, powerful and moving. It's hard to describe this as original when this kind of plot, about choosing to become aware that the world is a dystopia rather than the utopia you've been led to believe, is so widely used elsewhere, but there are other forms of originality here, including an ending that successfully avoids cliche and reminds the reader that freedom and self-discovery can lead to a great deal of pain.
This month Adam Tredowski's cover, left, and Daniel Bristow-Bailey's retro sci-fi drawing for Memory Dust are both excellent. In general though I was disappointed by the relative lack of striking illustrations elsewhere in 220, perhaps because I've been spoiled by previous issues - Interzone's often about the illustration as much as the stories.
Posted by Sci-Fi Gene at 08:00

I am head over heels for that cover. I saw it on SF Signal and went and looked at the artist's website right after...his work is amazing.

As I mentioned in my reply to you on my site, I have to track down a copy of this. Glad to hear there are some interesting stories in it as well.