They're made out of meat! [Review: Tender Is The Flesh]

The spread of a deadly virus leads to the elimination of livestock and animals in general - and to the creeping legalization of cannibalism and a future in which humans are farmed, bred and slaughtered for meat on an industrial scale.

Tender Is The Flesh (Cadaver Exquisito) is a dystopian novel by Argentinian author Agustina Bazterrica. It's told from the viewpoint of Marcos, a senior manager in the "special meat" industry with a role in every stage of the lives of the "heads." Motivated by a need to pay for his father's nursing home and recoiling from his own tragedies and the breakdown of his marriage, Marcos embodies the double-think of the time, taking pride in his expertise and business success while still  aware that he is participating in an atrocity. 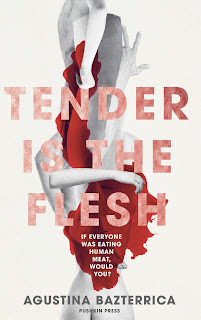 There are plenty of bleak, horrific novels in the dystopia genre - not least the torture-heavy 1984 and the misogynistic violence of The Handmaid's Tale or A Walk To The End Of The World. I may have become a little desensitized to literary violence but I rarely read a book that truly horrifies me - Tender Is The Flesh is a rare example of writing that stopped me in my tracks several times, even though I was still compelled to finish reading it.

It's clear that Bazterrica has far too much time on her hands and has spent much of it figuring out just how modern intensive livestock farming could be modified to farm humans, and all the ways that those on the right side of the electric fences might maintain the sense of denial, from the euphemisms such as "heads" and "special meat" to the scientific "evidence" presented against vegetable diets, to the legal structures protecting and regulating the process, to the removal of vocal cords from farmed humans to prevent them screaming or communicating. The detailed descriptions are shocking, particularly the chapter about 30% of the way through the novel where two job applicants are taken on a tour of the slaughterhouse. And there's still time for interesting subplots - the inhabitants of an abandoned zoo, and the implications that fear of infected bird droppings might be a conspiracy promoted by the umbrella industry. 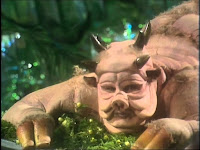 There's an obvious between-the-lines link to ethical veganism - for those of us who eat meat, are we acting on good evidence that, say, cows are not conscious beings, or are we taking that view in order to make ourselves feel better? Is it our IQ that distinguishes us from the animals - and if so would it be OK to eat a human with lower IQ than a cow?* And what of the Ameglian Major Cow, served at the Restaurant At The End Of The Universe and other fine intergalactic establishments - an artificially created, sentient creature genetically programmed to offer itself up to be eaten on an entirely voluntary, consensual basis. Is that OK?**

But this novel speaks to human-on-human mistreatment too - it's about how humans dehumanize other humans in order to justify tribalism, slavery, racism, misogyny, genocide and so on, and how we give ourselves license to act in this way.

Humanity is broken in this novel - symbolised by Marcos' father, a livestock farmer whose dementia was apparently brought on following the "Transition" to human meat. Marcos and many of his generation are fully aware of the identity of "human meat" - it's an unspoken universal truth rather than a Soylent Green mystery - and they are living with the hypocrisy and cognitive dissonance of treating the "heads" as both human and inhuman, in turn distorting their humanity and morality. Some go for complete "We don't eat people in this house" denial, while others embrace the Transition, such as the game hunters who are equally happy aiming at purpose-bred humans or celebrities gambling their debts on a life-or-death run, or the Scavengers who kill and eat at any opportunity. Marcos is given a chance of a kind of redemption - an opportunity to re-integrate his divided world; the actual outcome reflects just how broken we all are.